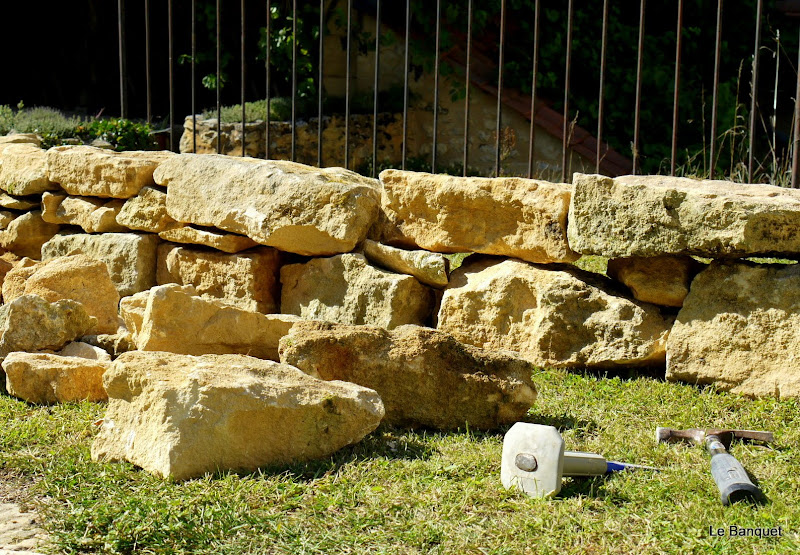 Back in July, I mentioned my plans for a dry garden here.

The soon to be converted piece of lawn grows in five inches or so of topsoil that sits over gravel and builders spoil. Not exactly fertile territory for growing much. The obvious solution was to raise the bed and hold it together with the local stone. Rather than spend weeks recovering pieces from fields and around as I did when making the car park steps, an altogether simpler solution was to buy some and as luck would have it, Monsieur Roy, who owns the lawn mower shop close by was selling recovered stone. So, two Saturdays ago I became the proud owner of a cubic metre, not bad for seventy euros and decent stuff it is. 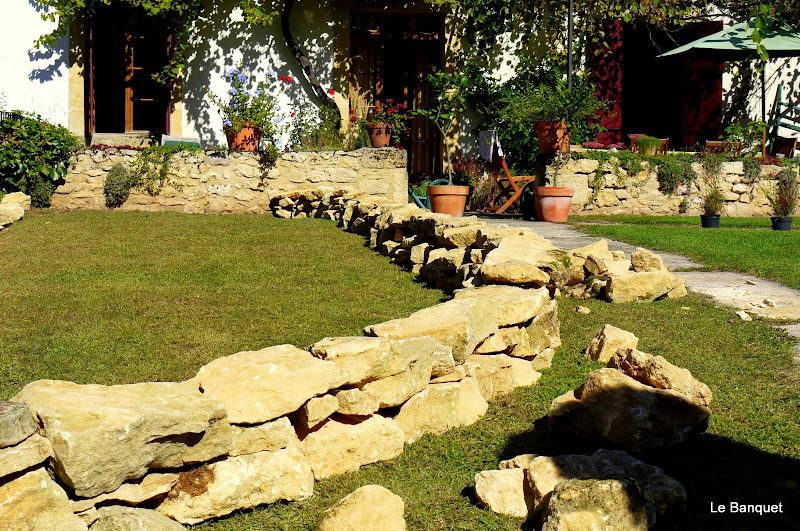 Satisfying putting a dry stone wall together. I'm using the term 'dry stone' loosely, but it ain't a bad attempt and one things for sure, when you see skilled trades people creating such structures deftly, each piece fitting perfectly together, then you realise that they're exactly that, skilled trades people. 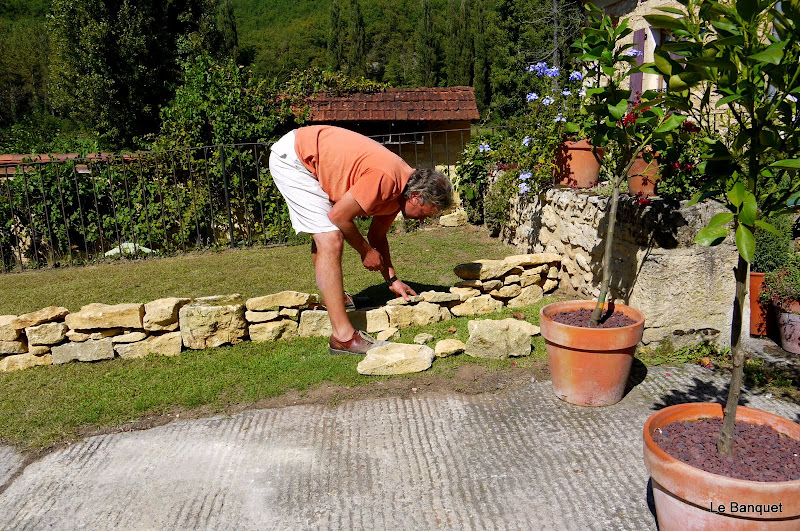 After placing the stones, it was just a simple case of digging over the old lawn before importing four cubic metres of top soil. I say just a simple case, that's a laugh, my back still hasn't recovered! I still have a further two cubes of topsoil to shift as the enterprise I bought it from would only sell a minimum of six. 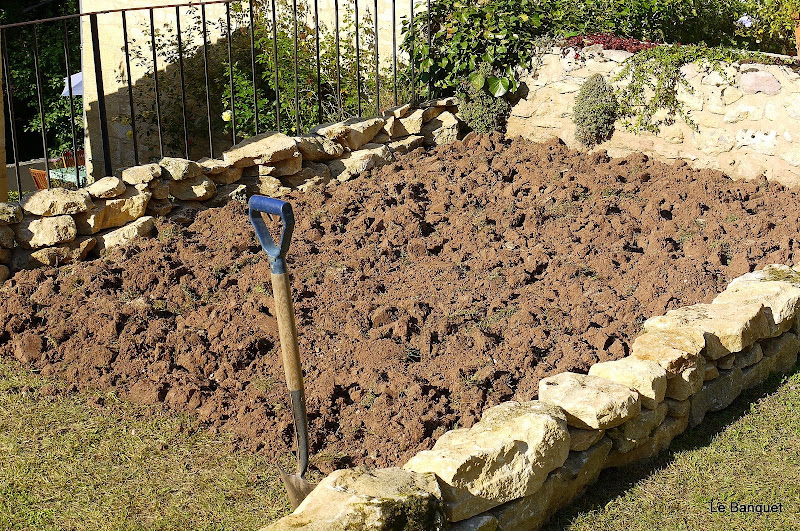 The next stage was my favourite bit, laying out the plants. Everything I purchased came from the truly wonderful Pépinière du Lac des Joncs owned and tended by the amiable Monsieur Willy de Wilde who I have mentioned before here. 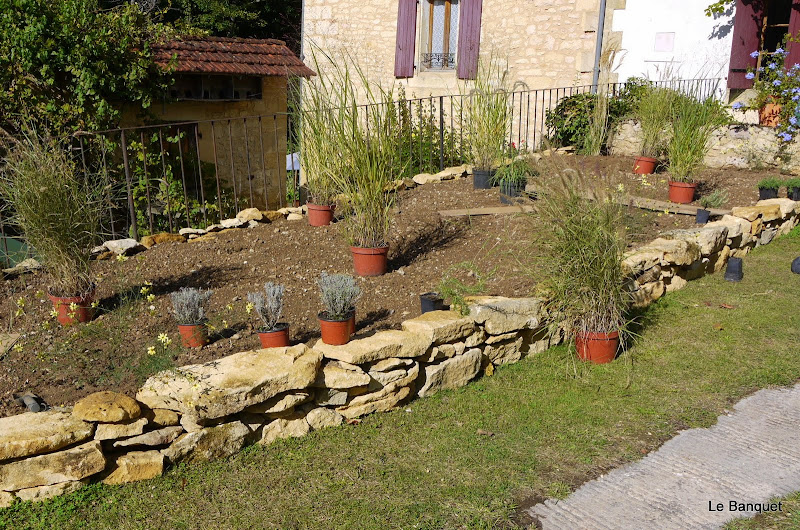 I did my level best to tread carefully so as not to compact the soil, nimbly balancing on old laminate flooring planks as I set out over a hundred plants as sympathetically as I could. 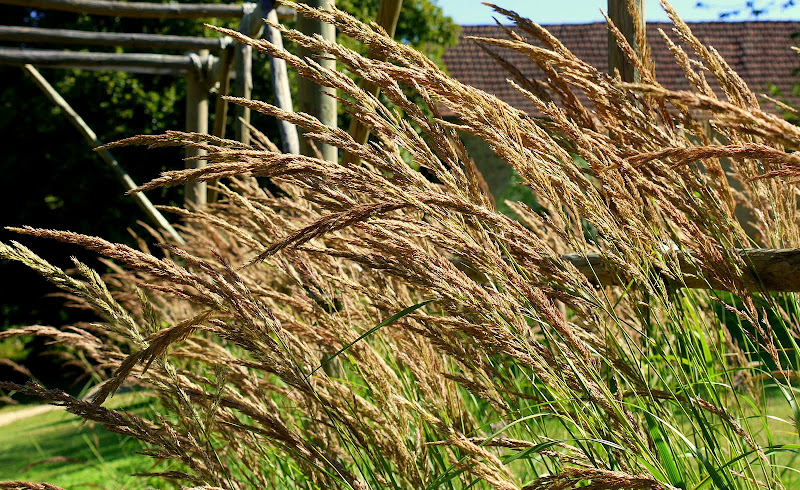 Stipa calamagrostis growing along the pergola. I'll simply chop pieces out with a spade and add this to the new garden. It does spread quite easily so it'll need managing. 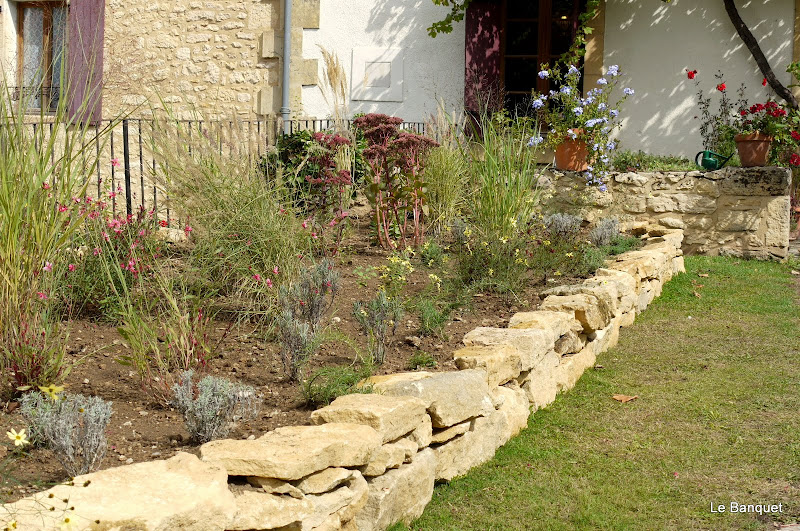 So there it is finished. I'll mulch it over in the coming weeks and then all I need is for a couple of years to pass until it becomes fully established and not a scrap of soil is visible, ah patience, but you know how it is.
dry garden