February 15, 2009
I've spent some time over the weekend improving the structure of my Pergola and drawing up a plan for the under planting.

The frame needed firming up so I've added some cross pieces in the top corners at the entrances together with down pieces along its length to give some extra strength to the rail that runs at waist level. This extra bit of structure also gives me something more onto which I can train the roses when they eventually get to height which I guess is going to take three years or so.

As before, I made these extra pieces from old tomato poles which I screwed onto the main frame and then bound the joints with rope to hide the screws and give it a rustic feel. 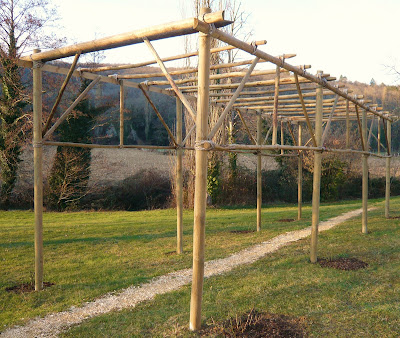 Now building the pergola was the easy bit. The underplanting, that's a different story. I must have changed my mind 50 times or more. It's not that I can't 'see it' it's just I suffer from 'Oh yeah, and I could put some of that in as well' syndrome. I used to be indecisive, now I'm not so sure.
So anyway, logical approach, I've drawn a plan and kept it simple. 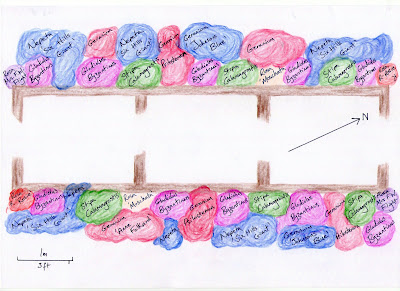 Et Voila, this really has helped me. Ok, it's not set in stone (please click to enlarge the pic) and guess what, I'm thinking 'Oh yeah I could put some of that in as well' but I'm pretty close to a final decision.

In effect I'm actually using four plants, hardy Geranium, Stipa, Nepeta and lots of Gladiolus Byzantinus which sends up beautiful magenta flowers in late spring, early summer. Not shown, and just remembered now is that I've got twenty bulbs of Liatris spicata or Gay Feather as it's commonly known. Hmmm, they'd look nice popping up in groups through some of the catmint.

So there it is, any suggestions, criticism or comments very thankfully received.